Story of ministry leader leaving and why.

What is an offence?

What does being offended do?

How do we fix this number one problem?

The best antidote is to be preventive.

Story of ministry leader leaving and why

While pastoring in New Mexico, I had a ministry leader leave my church. I called and tried to find out what was wrong, went to her home to reconcile whatever the issue was. However, she ended leaving and a few with her family left as well. I never went through anything like that up to this point as a pastor.

While seeking God, I started to find answers about this leader who abruptly left my church. God began to show me that walking in love was very important and that she was not responding in love and that I was to be sure I did. Then my eyes were open to the reason she left…. she became offended. Her offence, kept her out of the love of God and her offense made her leave and get out of her call to children’s ministry.

I began to experience what made a dedicated believer leave their call and place in my local church. I began to study about offense and learned that Satan uses it as a design against believers to get them out of the local church or not attend church at all.

During this time, one set of statistics was brought to my attention:

I was amazed that 66% of people will leave a church because of an offence. When I pastored, I would be further amazed at why some people would leave the church. People would leave for silly reasons; misperceive what someone would say or an action that was taken. When you asked them, they would not tell you the truth, or they dumped on you everything they think you did wrong and most of them said it with an attitude.

I believe we can help change the percentages of people that leave because they are offended.

What is an offense? 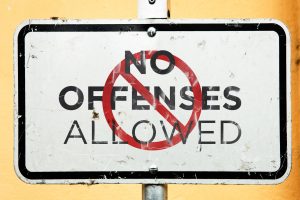 Webster definition: “The act of creating resentment, hurt feelings, displeasure; The condition of being offended, especially of feeling hurt, resentful or angry.”

Biblical definition: Greek word – skandalon; originally was “the name of the part of a trap to which the bait is attached, hence, the trap or snare itself.” “In New Testament skandalon is always used metaphorically, and ordinarily of anything that arouses prejudice, or becomes a hindrance to others, or causes them to fall by the way. Some uses in the bible are: “(a rock) of offense”; “things that cause stumbling” (KJV, “things that offend”), “all stumbling blocks”; “occasions of stumbling” “an occasion of falling” (KJV, “an occasion to fall”).
(from Vine’s Expository Dictionary of Biblical Words, Copyright (c)1985, Thomas Nelson Publishers)

What does being offended do?

How do we fix this #1 problem?

In other words, Satan uses people (flesh & blood) as bait to draw believers into an offense or his trap.”

“From that time Jesus began to show to His disciples that He must go to Jerusalem, and suffer many things from the elders and chief priests and scribes, and be killed, and be raised the third day. Then Peter took Him aside and began to rebuke Him, saying, “Far be it from You, Lord; this shall not happen to You!” But He (Jesus) turned and said to Peter (flesh & blood), “Get behind Me, Satan! You are an offense to Me, for you are not mindful of the things of God, but the things of men.”

Jesus discerned that his real battle was not flesh & blood Peter, but Satan himself using Peter. From this example, we can see Satan is the one setting up the trap, using people as bait, to get us caught in the trap of offence. When believers realize what an offense is, they will be more resistant against its design.
Know that Satan is behind the offense to bring hurt, resentment, offense and woe. He is swaying and influencing the wills of people to offend us or we may be perceiving something wrongly and becoming offended.

The amplified bible in 1 Corinthians 13:5, says,

“It is not conceited (arrogant and inflated with pride); it is not rude (unmannerly) and does not act unbecomingly. Love (God’s love in us) does not insist on its own rights or its own way, for it is not self-seeking; it is not touchy or fretful or resentful; it takes no account of the evil done to it [it pays no attention to a suffered wrong].”

1 John 2:10, reveals the absence of an “occasion of stumbling,” this works for the one who loves his brother and thereby abides in the light. Love, then, is the best safeguard against the woes pronounced by the Lord upon those who cause others to stumble.

Eph 4:31-5:2
Let all bitterness, wrath, anger, clamor, and evil speaking be put away from you, with all malice. And be kind to one another, tenderhearted, forgiving one another, even as God in Christ forgave you. Therefore be imitators of God as dear children and walk in love, as Christ also has loved us and given Himself for us, an offering and a sacrifice to God for a sweet-smelling aroma.

Walk in Love or respond in the God kind of Love – To be led by love, not by the offense.

Col 3:12-15
Therefore, as the elect of God, holy and beloved, put on tender mercies, kindness, humility, meekness, longsuffering;13 bearing with one another, and forgiving one another, if anyone has a complaint against another; even as Christ forgave you, so you also must do.14 But above all these things put on love, which is the bond of perfection.

Paul said in Acts Acts 24:16 “This being so, I myself always strive to have a conscience without offense toward God and men.”

Sometimes we can forgive and release others quickly. However, there are occasions where people could be hurt so badly, it will take striving or laboring at having a conscience free of offense. By experience, I know that the Spirit of God will help each individual believer overcome.

The best antidote is to be preventive.

A pastor should do his best to develop his leadership about this subject and then to his congregation and hopefully, believers will not get offended or be slow to take an offense. Mature believers can look out over one another and keep others free of offensive that becomes a root of bitterness and can create havoc.

Heb 12:15
Look after each other so that not one of you will fail to find God’s best blessings. Watch out that no bitterness takes root among you, for as it springs up it causes deep trouble, hurting many in their spiritual lives. TLB

I have a mini-book entitled “Overcoming Offenses” that pastors are handing out in counseling, to their congregations, offering in bookstores, giving and/or teaching in membership class. This has proved to be a valuable tool in helping people become aware of an offense and how to respond to it. Many, many times I have had people tell me that when they felt hurt or in an offense, they would read the mini-book and it brought freedom.
You can obtain a mini-book, DVD, or 4 CD teaching series on this important message to “Overcome Offense” by calling 423.836.0463 or order it on our website.